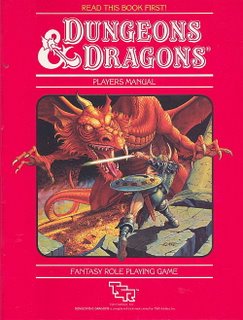 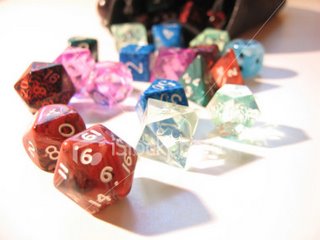 Believe it or not, RPGs did not originate from Nintendo, Playstation or XBOX. It was a box set of maps, cut out play pieces, player's manual and various dice such as a 20 sided one(d20). You would need some friends as players and one player as a game master. Your characters and events were recorded on paper. And you had to buy seperate adventure sets called a Module, like buying different video game cartridges. D&D was created by Gary Gygax in 1974. We should all appreciate him and thank him, because I know some of you out there at least played either Zelda, Warcraft or Final Fantasy. Yeah you!!! 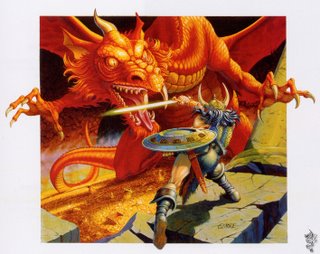 Frank Frazetta wasn't the only hip 70s Fantasy painter. Most of D&D box art and novels were painted by Larry Elmore: http://www.larryelmore.com/index.htm

Here's the intro of the cartoon released in 1982:

my favorite of the D&D artists(and i spent hundreds of hours perusing those paintings and drawings while i was playing the game) was Erol Otus.
you know the guy, he had the brushwork of Mark Kostabi and the anatomy of Art Clokey all bound together in a fantasy subject matter.

there was something indelible and markedly surreal about his work.
http://jrients.tripod.com/otus/dd-box.jpg

I used to own that very box (and the edition before it!)

I now have all the toons on DVD. Love d the show as a kid. One particular episode still stands out and that's the one with all the zombie warriors.

Elmore was the man!!!

Fancy meeting you here Mr. Bling!
Now then Dungeons and Dragons, I remember it well, in fact I still play but hey don't hold that against me. I started out with the boxed before this one with the cover by Bill Willingham I think. And the cartoon was cool at the time, even if the unicorn was annoying. I remember the episode with the Shambling mound as my favourite.

I think that was the box set I owned too. Was that the one with an expert set with a cover by the same guy (who did all the module art as well?)

I think I was either nine or ten when I got into because of my uncle who used to play. Warlock of Firetop Mountain hit the shelves and it all went uphill from there.

Coolest summer ever. My uncle was an architecture student so he used to build little dungeon sets out of polysterene(spl?) and as a keen wargamer he had a vast array of figures.

Wow! Memories of geekdoem, long gone! That really brings me back! Holy crap! I used to hold that book near and dear to my heart!
-AJS